Soil and What It Means to You 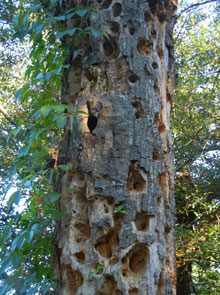 Be amazed by the biodiversity in soil! The soil food web includes bacteria, fungi, nematodes, worms, and all sorts of other creepy characters. I dig dirt. I have a tee shirt that one of my friends gave me to prove it. Plus, there is so much going on in living soil that you wouldn’t believe.

In a teaspoon of good garden soil there are 300 billion microbes and miles of fungal threads. Our sandy or sandy clay soils are dying for compost. Adding compost will improve moisture retention and offer nutrients as plant useable forms in sandy soil. It helps to break up and loosen tightly bound water and nutrients in clay soil. Microbial activity is key to productive growth and development of plants. As plants make their  own food from water and carbon dioxide, they need Nitrogen, Phosphorous, and Potassium to grow and manufacture the proteins, fats, and carbohydrates that become leaves, flowers, seeds, fruit, and fiber.

Some of the smallest of the microbes are bacteria. Bacteria are microscopic one-celled critters which have been around for a couple of billion years. They are good at breaking down organic matter but also provide plants and animals with defenses against diseases and attack harmful germs.

Actinomycetes are microbes somewhere between fungi and bacteria which give that rich soil smell to the earth. They are also the source of the -mycin group of antibiotics. Streptomycin, erythromycin, etc.

Fungi. They are decomposers- saprophytes, and other molds, yeasts, and mushrooms with strands of mycelium capturing the energy of formerly living plants and animals and making humus. Fungi have no chlorophyll and do not photosynthesize.  They are attracted to the sugary exudates that roots of green plants offer as a reward to the fungal threads and mycorrhizae, which in turn increase the surface area of the roots and assist in the uptake of moisture and nutrients. They improve the soil structure as they break down organic matter into humus forming long carbon chains.

The word soil means that there is life as well as the mineral, water and air components. Some of the easiest ways to have living soil.

Leave the leaves. Raking and bagging or burning leaves removes free fertilizer. Nature captures or sinks carbon to make plant parts. The leaves also contain other nutrients mined from the soil. When the leaves decompose, they insulate the soil, prevent moisture loss and soil erosion. They feed the soil and the soil feeds those recycled goodies back to the tree. So simple.

Avoid using chemical fertilizers. Many of them are salts and should only be used to jump start very depleted soils. As concentrated quick release sources of NP&K they don’t feed the soil and may exhaust the good microbes and worms. 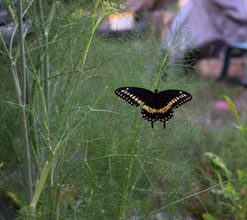 Not Just Pretty, But Edible

Give Up What You Must