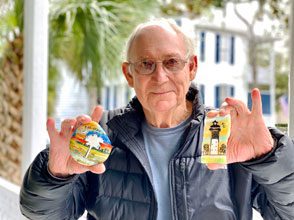 Finding Rick’s Rocks in Beaufort and Beyond

Sea turtles, lighthouses, campgrounds, school buses, whimsical characters, and Lowcountry scenes are just some of the images enjoyed by those who are lucky enough to discover one of Rick’s Rocks. Artfully painted by St. Helena resident Rick Smith, the 71-year-old retiree recently began hiding his colorful rock creations on Hunting Island and other Beaufort locations.

Painting some 500 pounds of rocks last year, this self-taught rock artist took up the hobby in 2018 and estimates he’s painted approximately 3,000 rocks! Says Rick: “I paint primarily at night. Some nights I will paint five or six rocks. Sometimes, I might just sketch a few.” With family in Beaufort and Hilton Head, Rick and his wife relocated to Harbor Island last June coming from Destin, Florida. “I had a friend who painted, and I ordered a few canvas boards and some paint. After ruining about four canvases, I finally completed a poor excuse for the Auburn Tiger Mascot,” he laughs.  A native of Alabama and an Auburn University alum, Rick later went on to paint his beloved Auburn tiger paw prints on rocks instead.

According to Rick (who surprisingly is color blind), discovering his hidden talent happened quite by happenstance after he suddenly noticed some flat rocks in his rock garden. From there, he adds, it was “learn as you go.” He realized through trial and error that he has to seal the rocks before painting and use special paints, brushes, and pens. After the painted rock cures, it then has to be sealed again.

It wasn’t long before Rick’s unique talent was noticed by others. Rick and his wife visit Key West, FL each year. On one trip in 2019, says Rick, some restaurants and gift shops shared an interest in him creating rocks as souvenirs. It was then that Rick’s Rocks was officially born.

While living in Florida, Rick began hiding his painted rocks while walking his dog and later joined a local rock group called Okaloosa Rocks. “It was an active group where people would post the rocks they found. It was amazing to see where a rock would travel via the various finders who relocated them.” Recently, Rick joined the Facebook Group called “Beaufort Rocks!” with close to 3,000 members of rock hunters who post their finds. Rick recently saw one of his rocks which he hid at Beaufort Memorial Hospital posted there by its finder! 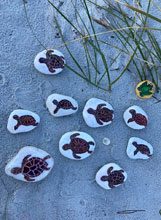 Island State Park (SC), Beaufort & Camping (Memories).” There, Rick lets visitors and locals know when he plans to hide his beautifully depicted Hunting Island Lighthouse rocks or others that he’s painted somewhere within the state park. One of his posts, Ricks says, “brought over 800 likes so I knew then that people were expecting them!” Since then, Rick has hidden his rocks on the island three times over the last several months.

Sourcing his rocks from Alaska and Greece, Rick says some of his favorite painted rocks are those that are beach related, dogs, or comical figures. “I have to admit that I really enjoy painting John Deere tractors with a red barn,” he says, adding that after visiting Dempsey Farms on St. Helena last summer, he left a few for Mr. Dempsey.

Thankfully, all of us get a chance to enjoy Rick’s Rocks if only we are diligent enough to find one! When you do, Rick suggests you post a photo on one of the local Facebook pages then be sure you re-home it. It this case, it’s not about “finder’s keepers” but instead about spreading joy throughout the community.

“I enjoy the smiles it brings to people, and of course, the compliments, too.”  But most of all, admits Rick about why he paints his rocks, “It’s nice when someone does something for you to make you feel special.”

Karen Snyder has pursued her passion for writing for more than 30 years. She has served as a corporate editor to Fortune 500 companies and contributing writer to many regional publications and magazines covering parenting, travel, health, education, and more. She relocated to Beaufort in 2018 and enjoys the Southern lifestyle and the coastal beauty of the Lowcountry. 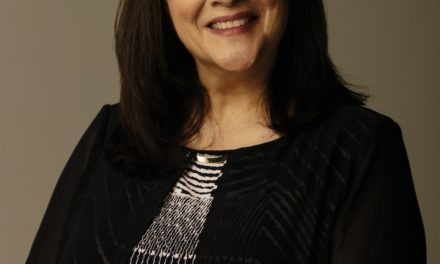 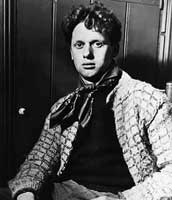 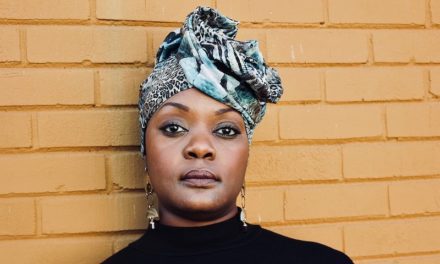